Prior to being symbolized as an evil figure in religion, the Devil was previously identified as the pagan god Pan. Pan represents primal masculine energy at its most uninhibited level; procreative, sexual, untamed natural instincts that represent the very nature of life itself. But taken to extremes, this behavior can become obsessive or addictive.

It can indicate a passionate or compelling relationship, with a strong physical attraction; although it does not necessarily imply a healthy one. The card indicate a form of enslavement, whether to an ideal or an addiction, or even a manipulative or controlling relationship. It can also carry an aspect of secrecy, such as secret plans being made, either by yourself or others around you. 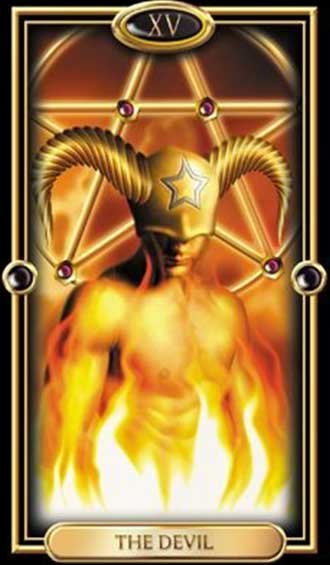 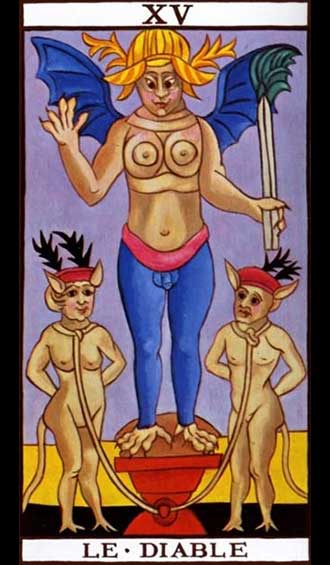 Very passionate love relationship, whose sexuality is important. Temptation, sexual magnetism, physical attraction, money, powerful and influential person, occultism, magic, materialism, snobbery. Instincts and aggressiveness dominate the professional and personal life. Being a slave to something, a situation or a person. Do not control his expenses, addictions and impulses. Wanting to control, manipulate others for our personal benefit. A superficial person who is obsessed with his image, appearance and reputation in the public eyes. Plastic surgery.

Reversed or in opposition: Wickedness, revenge, revolt, voracious appetite for power, alcoholism, drug addiction, smoking, anorexia, bulimia, gambling problems, nymphomania, infidelity, violence, black magic, intoxication, self-destructive attitude. Someone does or wants to hurt us badly. Financial, relationship or sexual problems. Conflicts of all kinds. Losing control, being under the influence of someone. Health problems often due to excesses and bad life habits.